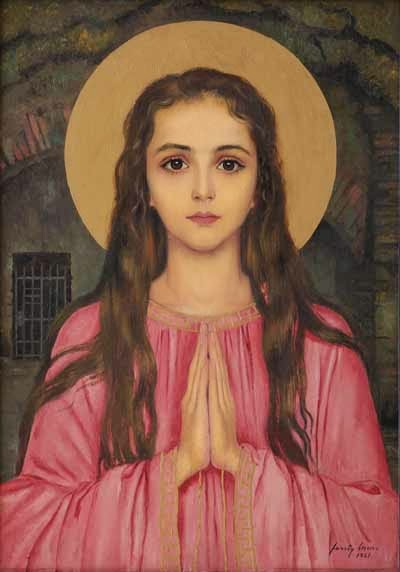 A Book of Prayers and Reflections by Fr. Lasance, 1911

For close on a hundred years the name of St. Philomena has been accorded in the Church a veneration which, growing intensified by the number of miracles vouchsafed through her intercession, has spread over the whole world. Previous to the discovery of her tomb and relics at the opening of the nineteenth century, her name had found no place in sacred story. There is a pious tradition that she was a child-martyr and a contemporary of St. Sebastian, who suffered in the reign of the Roman Emperor Diocletian about the year of Our Lord 286.

The Catacomb of St. Priscilla, outside the walls of Rome, lies beneath the Via Salaria Nova. Here, in the pontificate of Pius VII, a remarkable slab attracted the custodians of the cemetery, who were then prosecuting investigations there, and on the 25th of May, 1802, the tomb was formally examined. On the tiles that enclosed it, the following inscription was read: “Philomena Pax Tecum.” The devices which were interwoven with these simple words –an anchor, an arrow, and a palm–determined the spot as the last resting place of a martyr. The tomb was opened by Monsignor Ludovici, who disclosed to the gaze of his assistants and bystanders the precious remains. Beside them stood the phial containing the blood of the saint. The examination of the relics having been made, it was ascertained that St. Philomena had been martyred in her tender youth, at about 12 or 13 years of age.

The relics of the saint were bestowed in the Church of Mugnano, which was destined on this account and through the numerous miracles wrought by her intercession to become one of the most honored shrines in the Christian world. It was in the summer of 1805 that the relics were transferred to Mugnano. On the eve of the arrival the bells of all the churches were rung, and cannons were fired in honor of the advent of the relics. The inhabitants made their first petition to the saint by asking, through her intercession, that the long-continued drought from which their crops suffered might come to an end. The sound of the bells from the church towers had scarcely ceased when rain fell in copious torrents. At sunrise the procession entered Mugnano. The joyful inhabitants turned out in vast multitudes with olive branches in their hands to welcome the youthful martyr–and the little children, as they saw the case of relics dressed with flowers, filled the air with the cries of “Viva la Santa! Viva la Santa! Hail to the saint!”

During the course of the procession to the church of Santa Maria delle Grazie–which occupied two hours–many manifestations of the power of the saint were witnessed. Although the day was serene and beautiful at one time a whirlwind arose, and yet not a single one of the lights which were carried before the Shrine of Philomena was extinguished.

The body of the saint was placed under a splendid canopy at the Gospel side of the principal altar, where High Mass was celebrated. That day–the 10th of August–was observed as a feast day of obligation, and the spiritual rejoicings lasted over many weeks. The numerous wonders which immediately began to be wrought at this shrine induced Don Francesco–the saintly priest who had received them from Rome–to announce his long-cherished intention of keeping the relics in his private chapel. After a short time he bestowed them on the church of Santa Maria delle Grazie. Here a side chapel was prepared to receive them, and an altar erected, beneath which they were henceforth to rest for public veneration.

On the feast of St. Michael the Archangel, September 25, 1805, after the celebration of High Mass, the relics were carried in procession, and solemnly deposited in their appointed place. Mass was again chanted at the new altar, and thus ended the translation of the relics of St. Philomena. To the zeal and sanctity of the Cure of Ars may be ascribed, in great measure, the rapid and universal spread of devotion to St Philomena throughout France. Medals and other memorials of the virgin-martyr distributed by him were fruitful of many miracles. The story of the extinction of a fire at his house (caused by the agency of the devil), through the presence of a statue of St. Philomena, will be remembered by many readers of Monsieur Vianney’s life.

Among the clients of the martyr, whose special holiness has distinguished them in the annals of this century, may be named–Pere Varin, one of the restorers of the Society of Jesus in France; Venerable Mother Barat, foundress of the Congregation of the Sacred Heart; Madame d’Houet, foundress of the Faithful Companion of Jesus and Mary; Pere Eymard, founder of the Priests of the Most Holy Sacrament.

As regards the shrine at Mugnano, the present beautiful church, surmounted by its dome and towers, was undertaken in 1853, and completed three years later. Its great attraction is the chapel containing the relics of St. Philomena. A profusion of the finest marbles, mingled with agate and porphyry, cover the walls from floor to ceiling. Stately columns, supporting Corinthian capitals of white marble, impart an appearance of chaste splendor to the whole interior. Over the white marble altar stands the case containing the relics, revealing the figure of the saint, half sitting, half reclining on her couch, radiant in jewels and costly attire. Above is the familiar picture of our Lady of Good Counsel. At the opposite side of the nave is an altar, on which rests the reliquary containing the phial of the martyr’s blood. This exquisite casket was the gift of Marie Therese, Queen of Naples. It is entirely composed of silver, and through an aperture filled with glass the sacred relic may be easily seen. The generosity of faithful hearts, in happier times, bestowed vast endowments and estates on this church of St. Philomena, and thus provided for the relief of the poor and the advancement of other meritorious works. But, alas! the sacrilegious hands of the usurper have confiscated all.

The constant stream of pilgrims has, however, never ceased. Old and young, rich and poor, of all nationalities, assemble there, and bring away with them graces untold, and a deep sense of the power of God through the efficacy of His saints. The decree authorizing the devotion to St. Philomena, and granting to the clergy of Nola the privilege of saying Mass in her honor, was published by Gregory XVI on January 30, 1837. In March, 1839, the same Pontiff, by decree of the Sacred Congregation of Rites, raised her feast to the dignity of a double of the second class. It is to be noted that hers is the only instance of a “Proper Office” being granted in honor of a saint of whom no details are recorded or known, except the bare fact of her martyrdom. This was indicated, as we have already remarked, by the emblems cut on her tomb, and the three simple words inscribed on the slab enclosing her place of rest: “Pax tecum! Philomena.” “Peace be with thee! Philomena.”

Pius IX and Leo XIII gave evidence of a similar veneration for the martyr of the primitive Church. In Ireland, the devotion to this child–saint and martyr–has been taken up with great fervor, and rewarded with many striking favors.

The pious Sisterhoods, to whose hands is confided the great work of Catholic education, have not been slow to find how powerful is the help of the “little wonder-worker.” Schools, special works of charity, the wants of the sick and afflicted, have many a time been blessed and promoted in wonderful ways through the invocation of St. Philomena.

Her name is a household word in many Irish homes. Many a stricken heart turns to her for aid in the necessities which encompass our various paths through this land of distress and sorrow. And it is sweet to think that much of that beautiful fervor and devotion toward St. Philomena, which has spread like the odor of some delicate fragrant flower over pagan and far-off lands, has been borne thither by Irish hands and Irish hearts.

May our efforts to retrace some of the glories which surround the name of the youthful martyr of the Catacombs increase the fervor of those devoted to her. May they urge others to spread wider still veneration for her virtues of constancy and heroism, by which she obtained such favor with God, and merited so many benedictions for those who invoke her! St. Philomena! Pray for us.