Saint Philomena Chapel is a traditional Roman Catholic church in Roland, Arkansas affiliated with the Congregation of Mary Immaculate Queen (“CMRI”).  We have no affiliation with the Diocese of Little Rock, and are dedicated to promoting, practicing, defending, and spreading the timeless and unchanging Roman Catholic Faith and the Fatima message.

Our faith in the promises of our Lord (e.g. John 14: 16-18 & 26) and Catholic duty of obedience to the admonitions of His holy Apostles (e.g. Galatians 1: 8-9; Titus 3: 10-11; and 2 John 9-11) as well as the timeless and consistent teachings of legitimate Catholic authority (e.g. Canons 1364.1 and 2232.1 of the 1917 Code of Canon Law), compels us and all informed Catholics to reject (i) the contradictory teachings of the 2nd Vatican Council, (ii) the many harmful changes imposed pursuant to that council, and (iii) all who promulgated, imposed or continue to impose those changes as they cannot be reconciled with the infallible and consistent teachings of the Church throughout the centuries.  Our love of the Holy Faith and our Lord who gave it to His church mandates that we hold this position in obedient respect for the Papacy during the continuance of this interregnum prophesied by Saint Paul as he recorded in 2 Thessalonians 2 verse 7. 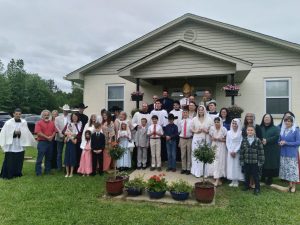 At Saint Philomena Chapel we celebrate only the traditional Latin Mass. In its essential details, the Latin Mass dates back to Our Lord and the time of His Apostles. To keep the Holy Mass pure and in its true and proper form Pope St. Pius V canonized the traditional Latin Mass in his Papal Bull, Quo Primum, in the form expressed in the 1570 edition of the Roman Missal. Quo Primum unified the already existing liturgies, declared this Mass to remain unchanged and explicitly forbade the introduction of new Mass Liturgies. This saintly Vicar of Christ concluded his Bull with the following words:

“No one is allowed to go contrary to this letter [paginam] which expresses Our permission, statute, regulation, mandate, precept, grant, indult declaration, or will and Our decree and prohibition; no one is allowed to act against it with rashness or temerity. But if anyone would presume to attempt this, let him know that he will incur the wrath [indignation] of Almighty God and of Saints Peter and Paul, His Apostles.”

Latin is the official language of the Church and is used in all of her liturgical ceremonies, blessings, decrees, etc. There are many good reasons for this.  Because Latin is a dead language and is not in common use by any nation or people, its words and their meanings do not change over time and it is therefore uniquely suited to the mission of the Church to transmit the teachings of Christ  in their pure and unchanged form. In only the last 50 years, many of our English words have taken on an entirely different, and sometimes, even a contradictory meaning. If this can happen is such a short time, how much more change has occurred in various languages over the course of the almost 2000 years of the history of the Catholic Church?

The use of Latin also beautifully reflects the unity of the Church. Wherever the Latin Mass is offered – whether it be in Asia, Africa, Europe, or any other place – it is one and the same.  As all Catholics are united in their holy Faith, so also are they united in worship by the Latin Mass.